Balancing My Life with Photography

As someone who works full time as a photographer, but not doing the type of photography I want, I tend to try and spend my free time searching for good photo opportunities. This usually means dragging my boyfriend, friends and family along with me so that I can spend my free time with them as well. This has resulted in friends sitting on the beach with me while I shoot sunsets, my mom hiking up a mountain with me, and my boyfriend driving me to downtown Houston at 4 AM to shoot a sunrise. 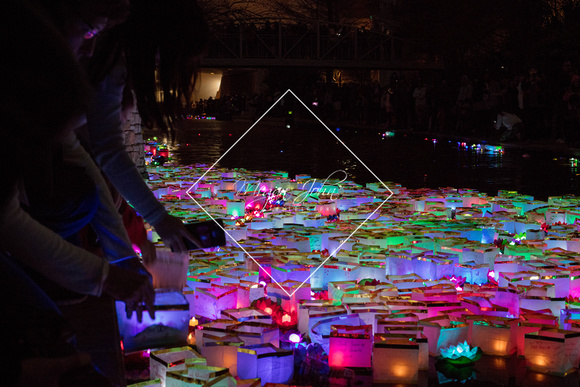 A recent photographic urge was hot air balloons. This came from seeing those gorgeous social media posts of hot air balloons over mountains at sunrise. Well, apparently I came across this idea a little too late in the year. It was days after the biggest Texas balloon festival and a few weeks after the Albuquerque Hot Air Balloon Festival, which is the largest in the U.S.. While I would still like to attend these larger festivals, I needed to scratch the itch. I found a local one, near my parents. It happened to fall the weekend of my mom's birthday and I decided to take her.

The San Antonio Hot Air Balloon Festival was only being held for the second time ever. Needless to say, it was quite small. I mistakenly did not research hot air balloons beforehand, and did not know that wind had such a big part of balloon festivals. You wouldn't think this would be an issue in San Antonio, but we were told that as long as you could see both the stars and stripes on a flag that was flying, they could not fly hot air balloons. This interfered with my plans greatly. 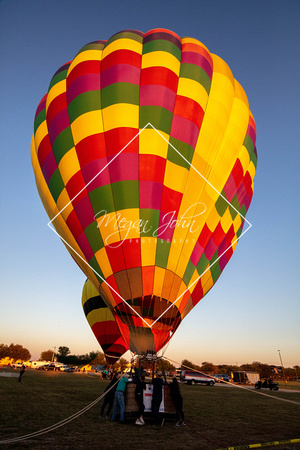 Hot Air Balloon FestivalAfter hours of waiting in a field with my family, these two balloons were fired up, but the winds prevented tethered rides.

I learned the best time to fly was in the morning. Here is what is wrong with my strategy of combining quality time with family with photography. I didn't want to force my family to wake up with me to shoot. My boyfriend was on the night shift and needed to sleep, and it was my mom's birthday and thought it would be rude to wake her up. I thought this would be fine because the festival went on for the entire weekend. There was supposed to be a glow in the evening, and I thought this meant that they would be flying (they stay tethered to the ground). Also, we were supposed to go on a tethered ride, but due to the strong winds that day, we never got the chance.

I would've loved to shoot other balloons while in the air, but even if the tethered rides had happened, no other balloons went up. The glow at night consisted of the balloons flaring and lighting up, which was spectacular, but just not what I imagined. Needless to say, I did not get to go up in a hot air balloon, let alone shoot other balloons from it. I made my family go out to the festival with me several times that weekend, but the only thing we got to see were the balloons glowing. 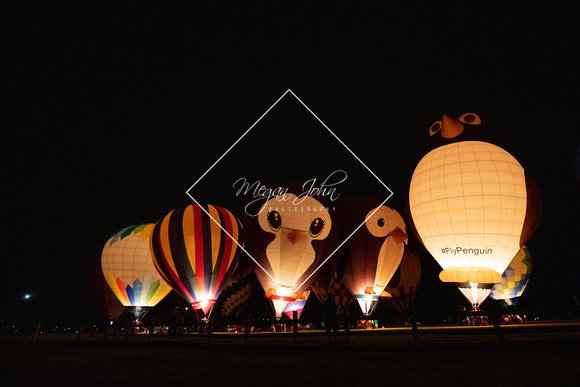 Balloon GlowThis was the only real opportunity to shoot the balloons. It took hours of waiting, and was incredibly difficult to time, as the balloons were flaring at different times.

What I have learned from this is that I need to separate photography from social time. If someone joins me while I am shooting, then it works out well. If I am trying to squeeze photos into time I have already set aside for family or friends, I get to wrapped up in juggling everything, and the photos suffer. I have also learned to do my research before an event.